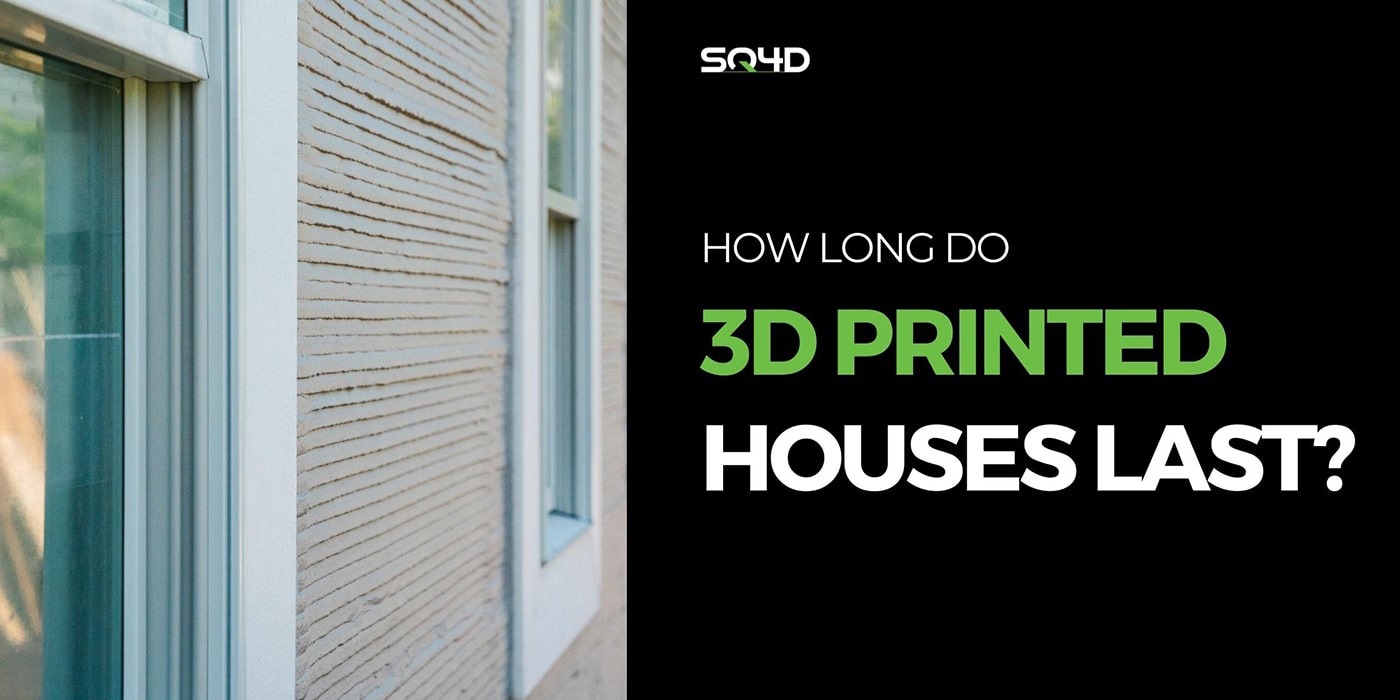 Perhaps you have heard of The Great Pyramid of Giza, the Colosseum, or the Parthenon. If you’re a trivia buff, you might even know of Göbekli Tepe. These notable structures all made it on to the list of the oldest known surviving buildings in the world.

As 3D printing technology advances and more and more structures are being created, people are starting to wonder how long 3D printed houses will last.

Aside from being on the same list, many of the impressive, long-lasting structures around the world have something else in common; they were created using limestone or variations of concrete as a principal material. Today, the most common type of cement is Portland cement, and its main ingredient is powdered limestone that has been heated in a rotary kiln.

Although the first iterations of concrete date back to around 6500 BC, the Ancient Romans were the first to implement concrete on a large scale for much of their construction¹. Unlike the Romans who used volcanic ash, lime, seawater, and volcanic rocks in their mix, the general ingredients in concrete today include cement, water, sand, and gravel, though many other additives and admixtures can also be incorporated. Luckily here in New York, volcanic ash is not a particularly abundant material.

Contrary to wood and other conventional construction materials that can decay quickly, especially if exposed to moisture, concrete deterioration is a much longer process. More than a thousand years after the western Roman Empire fell, its concrete structures are still standing. Bet you a lot of dollars that your neighbors’ stick built, conventionally constructed homes don’t have a shot at outlasting the Colosseum. Let’s explore how robotically built concrete 3D printed houses stack up to the formidable structures built long ago.

The Pantheon in Rome, which is the oldest in-use building in the world today, was built without the use of steel for reinforcement, instead using only concrete.

Understanding the Variety of Materials Used in 3D Printing

Conventional, small-scale plastic 3D printing has dramatically risen in popularity over the past several years. At the consumer level, the most common type of plastic 3D printer is Fused Deposition Modeling (FDM), and a variety of filaments and materials can be used, including ABS, PLA, ASA, PET, PETG, PC, nylon, composites, and a variety of hybrid materials. If you’re not a 3D printing nerd nor have an aptitude for plastics acronyms, you need not worry about these enigmatic letters.

Similarly, construction scale 3D printers can use a variety of blends and types of materials to create structures. Though the process of constructing an object by extruding a material layer by layer is similar, the material just doesn’t come in a conveniently rolled spool of filament as it does in plastic 3D printing, and it either has to be mixed on the construction site, or brought in via a ready-mix truck. 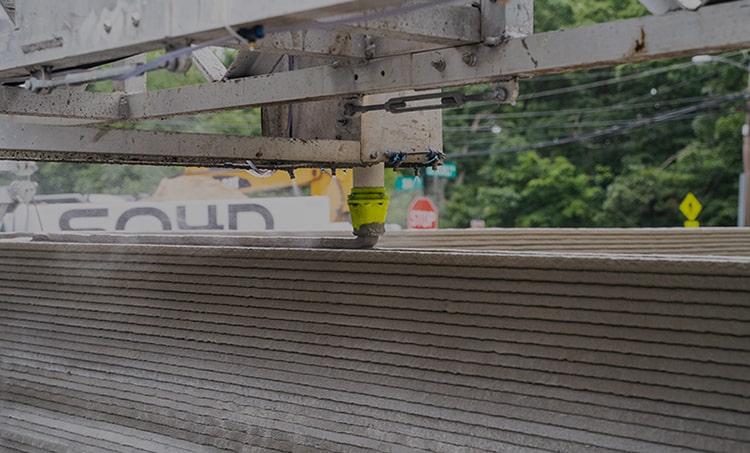 Long Island, NY-based company SQ4D uses a simplified blend of typical concrete materials. Because of this, the material can be easily understood by building departments, unlike the material used in some of the proprietary blends with less well-known properties.

Since every company uses a different material, this time estimate will only consider the more traditional cementitious material blends used in creating homes, like those of SQ4D.

Characterizing the Strength of the Homes

In a recent project in Riverhead, NY in which SQ4D constructed a 3 bedroom 2 bathroom home, SQ4D’s 3D printed material averaged nearly 9,000 psi in compressive tests. The compressive strength of a material indicates the capacity of the material to withstand loads pushing it together.

Let’s put that strength into perspective. 9,000 pounds per square inch (psi) probably doesn’t mean much at first glance. Take a US Quarter, which is about 0.955” in diameter (so roughly equivalent to 1 square inch), and hold it between your fingers. Now take a full-size ambulance and balance it on top of that quarter. Or balance a fully grown hippopotamus. Or a 40’ shipping container. Put that weight on a single square inch and that’s a pretty good representation of what the concrete is capable of withstanding.

Aside from the compressive strength of the concrete itself indicating that the material can resist high applied forces before failure, the other very relevant component contributing to the strength of the overall structure is the rebar support.

Reinforcing bars typically come in two primary grades: Grade 40 and Grade 60. The former has a minimum yield strength of 40,000 psi, and the latter has a yield strength of 60,000 psi. The yield strength of a material indicates the maximum stress that can be developed without causing permanent distortion. Now we’re talking 3 African elephants, or 10-20 giraffes, or a loaded school bus, or a firetruck on that quarter. Watch out, George Washington. 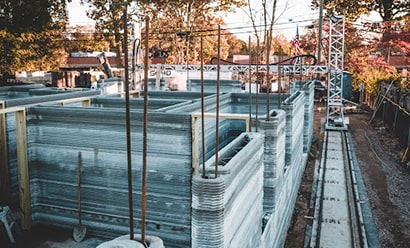 In 3D printing, layers must bond together while constructing the homogeneous structure; the timing between layers is very important in that there must be enough time for the layer to set up and support the subsequent layers, but the less time between layers, the better the adhesion between them. The bond strength is just as important as the strength of the material itself.

Higher compressive strengths result in a more dense concrete with low permeability. Since SQ4D’s mix is Portland rich with a very high compressive strength, more of the cross-section of the wall is filled with fine particles, reducing the size and number of microscopic voids that would allow water from the environment to enter, resulting in a longer lifespan.

Although 3D printed homes are still a relatively new commodity that has yet to stand the test of time, the properties of comparable solutions have been studied for decades. As there is an astronomically bigger chance that you have seen more concrete blocks and commercial precast buildings than 3D printed houses, benchmarks will be used as points of comparison. All of these methods make use of reinforcing rebar in addition to the concrete creating the structure.

Concrete blocks, or concrete masonry units (CMUs) are still used today for many structures. As per ASTM standards, all concrete blocks must support at least 2,000 psi. Not sure about you, but most people would rather have the guy that can lift 9,000 lbs (SQ4D’s 3D printable material) on their team than the one that can lift 2,000 lbs (traditional concrete blocks). Unless you’re a Knicks fan, in which case you’re going to root for the one you feel loyal to regardless.

Concrete blocks were created in the late 1800s and have been used to create structures since. It has been demonstrated that concrete block construction can last around 60 to 100+ years if properly maintained. These structures do not need a lot of maintenance, but it is easy and affordable to repair cracks.

Though the concept of precast concrete has been around just about as long as concrete itself, precast concrete paneled buildings were first created in 1905. The anticipated lifespan of the panels is 50 to 100+ years, but durability requirements can be specified in some cases to extend duration.

The following chart demonstrates common reasons that concrete structures eventually fail, and compares how susceptible each type of building is to the failure mode qualitatively by use of the color scale indicated.

So now that you’ve imagined elephants on a quarter, and have unsuccessfully tried to punch a hole through that cinder block in your backyard, you probably want that estimate for how long a 3D printed house will last as promised in the title. We are happy to prove out some fatigue cycle failure equations if you are not convinced; we just figured the qualitative comparisons were less painful than whipping out mathy Greek letters.

Since the material is much stronger and denser, and the geometry fairs better against stresses, one can reasonably estimate that the lifespan of 3D printed houses should well outlast that of CMU and precast panel construction. Based on the comparable benchmarks, a well constructed 3D printed house should last for a minimum of 100 years, and could potentially last well over 300 years. Well constructed means that there is no delamination between the 3D printed layers, and proper hydration has been maintained throughout the course of the build.

SQ4D is so confident in this estimation that the company is offering a 50 year warranty on their 3D printed homes.

In order to extend this impressive expected lifetime even further, different additives could be implemented into the mix. The main problem causing the structure to degrade in modern construction is the rusting and expansion of rebar, and this could be avoided by using a different reinforcement material. However, things like stainless steel (which does not rust) costs easily 8 times more than rebar.

Someday if we want to give the Colosseum a run for its money, we’ll have to look into rustless reinforcement and scrounge up some volcanic ash to sprinkle in. At this stage, SQ4D aims to focus on creating very high-quality houses that are affordable, and will last well beyond the expected life of most buildings constructed in modern times.

We're set out to 3D print your next home, building, or the road you take to get there. 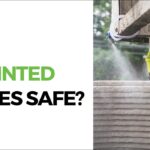 How to get a 3D printed house

Everything your logistics business needs is already here! GlobeFarer, a theme made for transport service companies.

You can find us at

Get in touch with us